In a move to make the city more environmentally friendly, businesses across the boroughs will be banned from using and selling single-use foam products in the new year.

Beginning Jan. 1, stores and food-service businesses can no longer sell or possess foam items like food takeout clamshells, plates, cups and bowls. Manufacturers and stores will also be barred from selling packing peanuts.

The new policy, which also covers mobile food carts, comes after single-use foam items were found to be non-recyclable, according to the Department of Sanitation.

The material is instead collected as trash and often wreaks havoc on the surrounding environment when not disposed of properly by consumers and businesses. 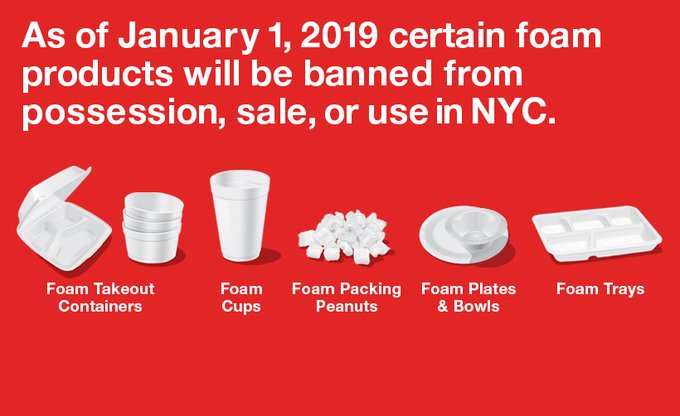 Stray foam can clog storm drains and makes its way onto beaches and into waterways, becoming hazardous to marine life, Garcia said. It also contaminates the city’s recycling and organics programs.

Businesses will now have to make a switch to recyclable materials, such as paper, plastic and aluminum, or use compostable products.

The ban, however, does have some exceptions. The new policy does not cover foam containers used for prepackaged food that have been filled and sealed prior to the business receiving them; foam containers for raw meat and fish, or protective foam blocks used in shipping.

Small businesses making less than $500,000 in gross income and nonprofits will also be able to apply for a hardship exemption under the new policy if they can prove that purchasing alternative products will create a financial burden for them.

A six-month grace period will also begin on Jan. 1 to allow for businesses to make the transition to recyclable alternatives before fines will be imposed.

The city will also reach out to affected businesses throughout the city to ensure that they are prepared for the transition.

The new policy was years in the making, with strides made in 2013 and lawmakers eventually voting yes to the ban in 2015. The foam ban then, however, was struck down in court after a judge ruled that the city had not sufficiently proved that foam was non-recyclable.

The state Supreme Court then ruled in favor of the ban earlier this year after the city had submitted more evidence backing the environmental reasons for the policy.

Any cookies that may not be particularly necessary for the website to function and is used specifically to collect user personal data via analytics, ads, other embedded contents are termed as non-necessary cookies. It is mandatory to procure user consent prior to running these cookies on your website.